A history of the club would not be complete without a brief mention of the history of Betchworth Park and the castle, which from the Norman conquest until the mid – nineteenth century was such a feature of the neighbourhood.

The origins of Betchworth Manor are recorded back to the days of Rufus but those of Betchworth Castle itself are unclear. It has been suggested that the earliest buildings date from the days when Betchworth Manor was held by the first Earl of Surrey, William de Warenne, a Norman count ennobled by William 11. Subsequently Sir Thomas Browne acquired the manor and castle from the Arundel family in about 1435. Browne was treasurer to the household of Henry V1 and was granted a licence in 1449 which included the freedom to ‘empark’ the manor, meaning that the game and hunting rights belonged to the owner not the sovereign. It was during Browne’s ownership that sweet chestnut trees were planted, the remnants of which can be seen around the course, particularly behind the greenkeeper’s storage sheds.

The Browne family owned the estate and castle until Margaret Browne married William Fenwick in 1691. Fenwick knocked down most of the old castle and turned the remainder into a smaller house. After his death in 1724 the next owner was Abraham Tucker, who acquired the estate in 1727. He planted the avenue of limes running up towards the castle and which were famed for so long. He died in 1774 and the estate was acquired by Henry Peters (a London banker) who enlarged the castle and built the stables which can still be seen in Castle Gardens. His son sold the castle and estate to Henry Thomas Hope of Deepdene House in 1834 and it was he who partly demolished Betchworth Castle to provide a picturesque ruin, a feature of estates much in vogue at that time.

Origins of the Club

In April 1911 the Dorking and Leatherhead Advertiser reported that negotiations had begun for the formation of new golf club for Dorking on a large portion of Betchworth Park . It was estimated that  “to lay out a thoroughly good course, to erect a suitable clubhouse and to provide other requirements will require a sum of anything between £4000 and £5000.”

These negotiations were being conducted between Mr FS Phillips and Lord Francis Hope. Lord Hope was prepared to grant a lease for a golf course and Phillips had circulated a letter seeking local support to form a limited company for that purpose.

On Saturday afternoon 9th December 1911 at The White Horse Hotel in Dorking  Phillips chaired a meeting attended by sixteen gentlemen who had responded to his circular letter.  They promised sufficient financial backing and agreed to  form a committee to carry out the detailed work of company formation, the laying out the course and building a clubhouse.

By the time the committee first met on the 15th January 1912 Phillips had been in consultation with Harry Colt, the distinguished golf architect, and the general features of the course had been identified. The entire course was to be laid out for a sum not exceeding £1500, exclusive of water to the greens.

Harry Colt was an inspired choice and had already designed courses at Rye, Stoke Poges and Burhill.  He went on to design many great courses in Great Britain (notably Sunningdale, Wentworth and our neighbouring courses at Tandridge and Effingham ) and also on the Continent and in America.

Betchworth Park (Dorking) Golf Club Ltd was incorporated in February 1912 with registered offices in the City of London.  Phillips was elected chairman by the directors who were all members of the original committee.

It was estimated that it would cost £6000 for the course and clubhouse construction. By August 1912 there were 53 subscribers to shares in the company, each being entitled to a single one shilling share and debentures in units of £100 and £50 on which interest was to be paid at 4% . Sadly, the finances of the company meant that interest was never actually paid.

F.S Philips is considered to be the club’s founding father and we mark his contribution to this day with the Phillips Cup.

Construction of the course and clubhouse

Work did not commence until September 1912, later than had been expected, but was completed in less than 12 months – a remarkable achievement that says much for the skilful direction of Colt and the capability of the contractors.

The final cost of the course construction was £1671, including £90 of machinery taken over from the contractor. The total expenditure for the course and clubhouse was £3670, well within the original budget. 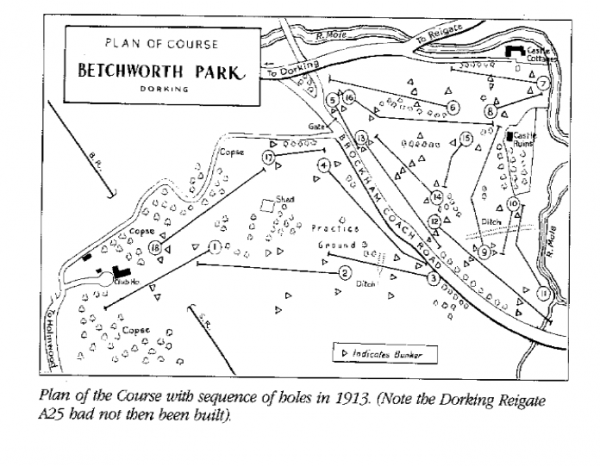 Opening of the Course

The course was open to members to play on Friday 1st September 1913 but there was no opening ceremony.

The following are extracts from an article by The Times’s renowned golf correspondent Bernard Darwin:-

“One of the newest courses in the neighbourhood of London is that of Betchworth Park Club (about a mile from Dorking). It is the work of Mr H S Colt, and for the golfer whose desire is to be stimulated by a demand for shots at once testing, interesting, and within the power of the ordinary mortal it is full of fascination. It is a course of character, a course of great variety, which calls for thought without ever submitting the player to the pursuit of what is sometimes called “trick golf”.

The Betchworth Park course stands high and the views from it are really gorgeous. Box Hill stretches high and wide alongside the course and at frequent intervals peeps into picturesque woodland and cornfields reward the eye. There is a very fine avenue of lime trees dividing the 11th and 9th holes and within a few yards of the 8th green are the remains of Betchworth Castle, a brave array of walls with beech trees flourishing in the walls and fireplace.

The design of the course is such that in the long game the puller and slicer are punished in turn. The14th deserves some special praise because it represents in a new way, a new type. It is a variant of the dog-legged hole; instead of having an angle, and therefore a point to aim at when trying to place the drive, it is crescent shaped. Vardon, who has probably seen as many courses as anybody, describes this hole at Betchworth Park as “a beauty and unique”.

With its sandy subsoil, which renders play possible at all seasons, its fine turf, its beautiful surroundings and its distinctive hole, Betchworth Park is a notable addition to the courses in the neighbourhood of London “

The club’s first professional was Harold Carter, remembered today with the Carter Trophy.

In May 1912 the Company’s articles were amended to provide for the day – to – day management of the club by a committee composed of ten members, half of whom were elected from amongst the debenture holders.

The committee also regulated admissions to membership and decided that the club would be restricted to 150 men and 50 women. The annual subscription was five guineas and there was no joining fee.

The club’s revenue was badly affected during the Great War and it was in financial difficulties for a large part of its first 10 years, so much so that in August 1917 there was a special meeting of the directors at the Ship and Turtle in Leadenhall Street to consider what should be done about the hefty overdraft at the bank. We do not know whether the members were asked for additional subscriptions, but the club’s survival was probably due to the personal generosity of Chairman Phillips.

He also approached Lord Hope during this period to have and it was agreed to reduce the annual rent to £100. The first lease came up for renewal in 1920 and Philips negotiated a new 21 year agreement so that the club was secure until 1941.

The Second World War and its immediate aftermath had significant effects on the club.

During the war much of the 18th fairway and practice ground were ploughed up for food production and the rest of the course across the coach road was used as grazing for sheep. The clubhouse was occupied by the Home Guard and Canadian Army as a mess. There was searchlight on the course and some bomb damage.

After the war the club decided that membership would no longer be restricted to ‘professional gentlemen’, reflecting the change in attitude of members returning from campaigns where they had served alongside tradesmen and workmen.

Gradually the course and clubhouse returned to normal and a good deal of expenditure on both was required. Financial problems dogged the club once again and the ten years after the war were a rather sorry tale of financial decline, the failure to increase membership or for the existing members to rally round. It was only the personal guarantees of certain directors that covered the club’s borrowings and kept it going.

In 1954 the club missed an opportunity to buy the freehold for £7500, which was bought by Dorking Urban District Council.

Tod Clark took over as chairman in 1956 and under his six year tenure the club returned to financial stability and the foundations were laid for the successful club we have today.

The original pavilion-style clubhouse was sited near what is now the 2nd green, giving magnificent views across the course and had a congenial atmosphere, but by the early 1960’s was showing its age.

After much debate about location, a new clubhouse was opened in April 1966 at a cost of £67000. It was sited next to what had been the 17th green, which necessitated the creation of a new hole to replace it – now the short  2nd – and the previous 18th becoming the 1st.

The original lime tree avenue planted in 1794 had to be removed in 1964 and were replaced by new saplings. The lime trees now between the 16th and 17th and 5th and 18th fairways were planted at the same time.

Members subscriptions provide the lifeblood of the club, in return for which they are able to play in a parkland setting that has existed for centuries on a course laid out by an acclaimed architect whose inspired design has been left largely undisturbed.

Much of the above has been extracted from A History of the Club 1911-91 by Michael Hogan. Hole numbers quoted are for the current layout.