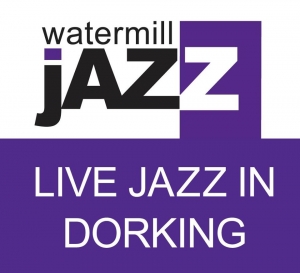 Watermill Jazz was founded in March 1994 by pianist Ann Odell and the late Steve Spurling, at our original venue The Watermill in Reigate Road. From October 2001 until April 2016 we were based at the Aviva Sports and Social Club in Pixham Lane, Dorking.

We moved to our current venue at Betchworth Park Golf Club, Reigate Road, Dorking in May 2016. Weekly concerts are held on Tuesday evenings every month of the year except December. Admission is from 8.00 pm and the music starts at 8.30 pm. Seating is comfortable and there is a licensed bar separate from the music room. Disabled access with stair lift and toilet facilities on site at the Golf Club. Ample free parking on site. Hot buffet food is provided from 7pm onwards by the golf club at the cost of only £12. To order food please click here

Some of the highlights over the years below

May 2001 we were privileged to present the quintet of John Dankworth and in October 2004 another legendary name in British jazz performed at the club the Humphrey Lyttelton band.

In 2005 we purchased our Yamaha C3 Grand Piano. The following February, John Horler’s CD The Key to it All was recorded live and released to critical acclaim on Diving Duck Recordings label.

October 2006 saw the first of our now yearly concerts at The Menuhin Hall, which in 2006 featured Stan Tracey quartet including Bobby Wellins perform Under Milk Wood.

May 2010 We commissioned Paul Busby to write The Watermill Jazz Suite, which was premiered at the club.

March 2014 We celebrated our 20th anniversary with a special performance by Sax Appeal, with the premiere of Derek Nash’s Phoenix Suite, written by Derek under commission from the club.

November 2014 Our 20th anniversary celebrations finished with a special end of year concert by Alan Broadbent and the Mark Nightingale Big Band, recorded on the evening by the BBC. This was subsequently broadcast on Radio 3 the following month, as part of Jazz Line-Up.

We aim to present the finest in Jazz from top UK and overseas bands, coupled with giving an opportunity to the best of the younger bands on the scene today. The music ranges from mainstream to post bop and contemporary music, whilst the bands vary in size from solo acts right through to big bands.

For more information and to book tickets please click here