The turf industry used to have two insecticide products for the control of leather jackets and chafer grubs. Gamma-col containing lindane was banned by the EU in 2009, which left one Cyren which contained chlorpyrifos, this was banned by the EU in March 2015. This has left the turf industry with no insecticides. Without doubt there will be no chemical residual left in the ground which is why we are seeing a leather jacket explosion. Another factor has been the lack of any harsh frosts over the last two/three Winters.

The leather jacket is the larvae of the daddy long legs, when the they lay there eggs in late Summer, the grubs feed on the roots through the Winter/Spring and in some cases can have a devastating impact. The first two pictures are from the 3rd fairway, the damage here has been pretty bad, with a fair amount of grass cover lost. The last two pictures are from the 1st green. There are a handful of greens that have a pitted look to them and within the pit Mark is nail sized hole where the leather jackets come from below to the surface. The pit mark is basically where the root has been eaten. However on the plus side no grass cover has been lost. It is a case of doing two or three top dressings to restore the surface levels.

The downside to having no chemicals apart from the root damage is the bird damage. Grubs are a bird’s favourite meal. The bird damage can have a big impact on the surface but will recover with a few top dressings, remember the bird damage to the 4th fairway earlier in the year. We are caught between the devil and the deep blue sea, the birds are taking the grubs which is the only control at the moment, but in the process creating a mess on the surface. On the plus side at least it’s not badger damage. Again on the plus side there is a product called Acelepryn which has been given emergency approval between August and October. The downside, expensive and timing is critical. 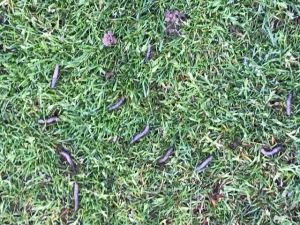 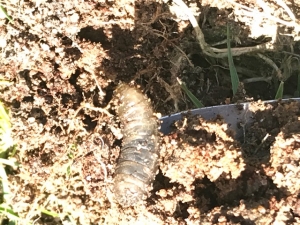 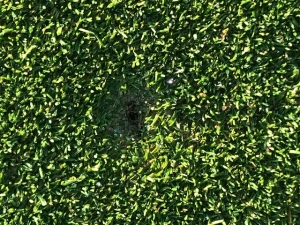 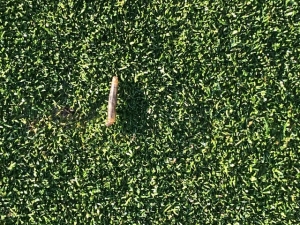